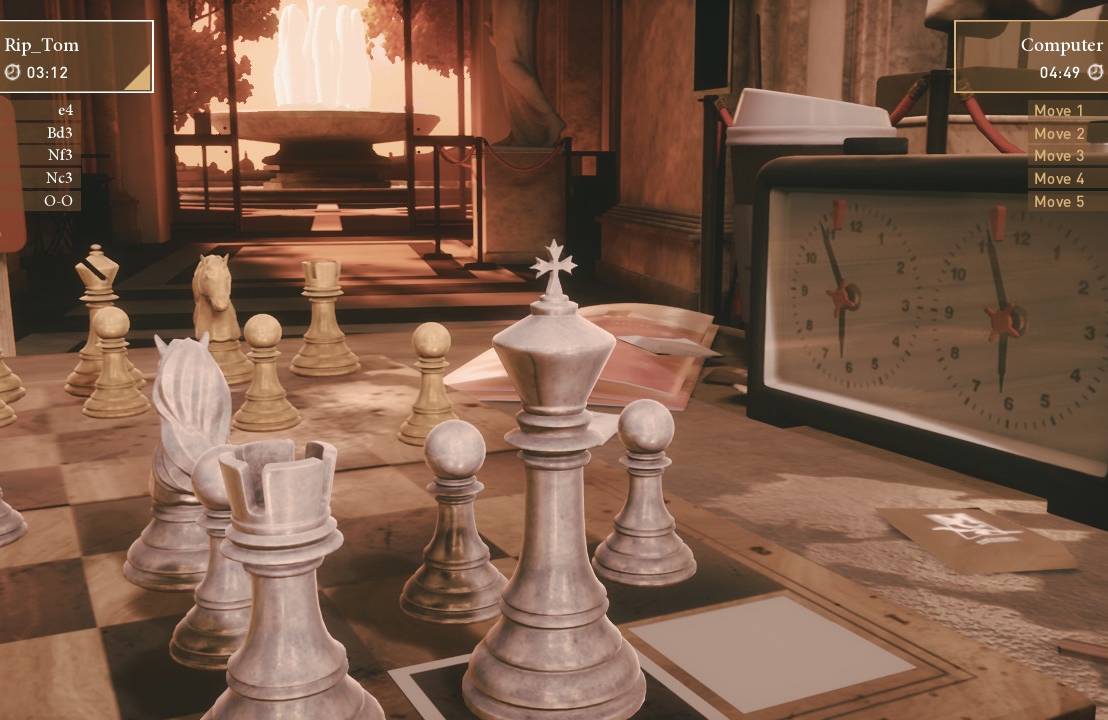 Unlike many games reviewed on this site, Chess Ultra doesn’t need much of an explanation. Let’s face it, it’s chess. If it was a whizzy new game it would fit rather neatly into the turn based abstract strategy genre. But it’s not new, it’s good old chess.

Chess Ultra is a multi-platform chess offering that has previously graced the PS4, PC, Xbox and VR supported platforms. Last but not least, it has finally come to the the Switch, Nintendo’s increasingly popular, play anywhere wonder machine that’s probably going to fly off the shelves this Christmas. Whether you’ll want to pick up developer Ripstone Games’ Chess Ultra for your Switch, which when you get right down to it is more or less a slightly improved version of their previous effort, Pure Chess, is another matter altogether.

So what does Chess Ultra do to make it worth your money and turn itself into more than a just a bog standard chess game? Let’s take a look at what it offers for budding Magnus Carlsens. 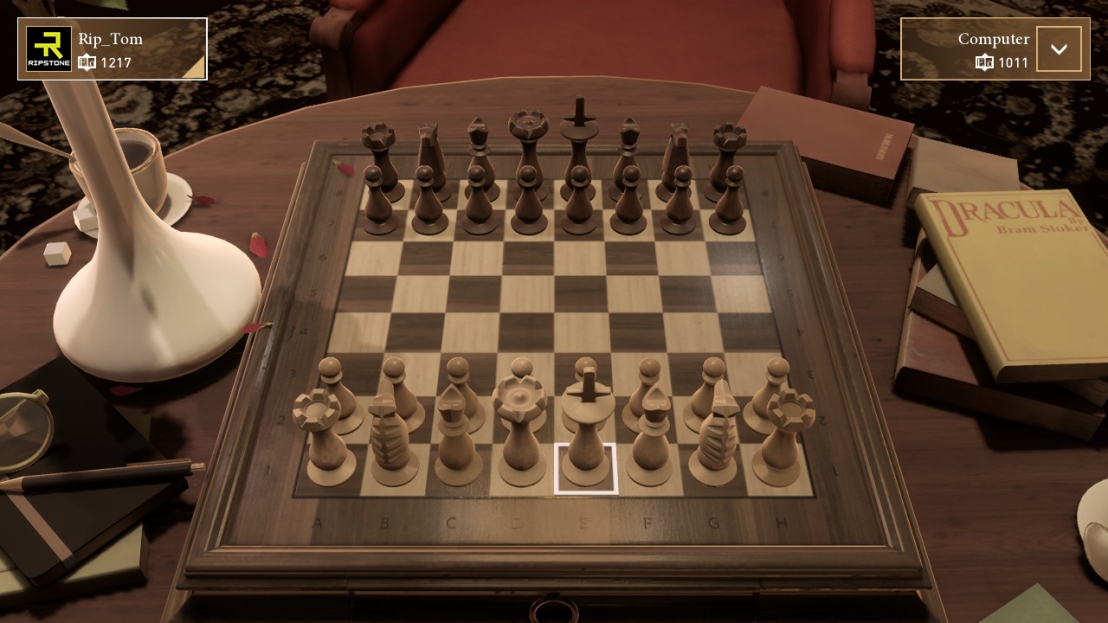 At first glance Chess Ultra looks and sounds really rather lovely. It features four well modelled 3d chess sets and boards, all in a variety of settings such as a country manor, accompanied by soothing background music. You can mix and match your playing location, pieces and the material that they’re made of.

The graphics look a little soft edged in handheld mode but a good deal crisper when played in docked mode. There are a few preset camera angles and you can also manually set your own angle, if desired. Three dimensional chess is all well and good but over the years I’ve found that computer chess is really always best played on a top down 2d board. The 3d Staunton set is playable using the default camera view but using the Fire and Brimstone set it was too difficult to tell what the pieces were, let alone see much of the board.

I was disappointed by the top down ‘2d’ view as the board and pieces were still rendered in 3d and and had distracting shadows and highlights on them. Really, all I wanted was a clean and crisp, top down, no-nonsense 2d view.

If you’re brand new to chess or need a refresher you can run through quite a number of tutorial lessons. Chess Ultra will teach you how to move the pieces as well as look at basic chess strategy and tactics such as pins and forks. Each tutorial features a brief explanation and then asks you to move a piece or carry out a tactic. The main shortcoming is that it doesn’t let you retry tutorials if you didn’t understand them the first time around. Looking at the tutorials as a whole, while useful for absolute beginners I feel that they could and should have been a lot deeper. You can easily learn the same thing for free from any number of chess sites. 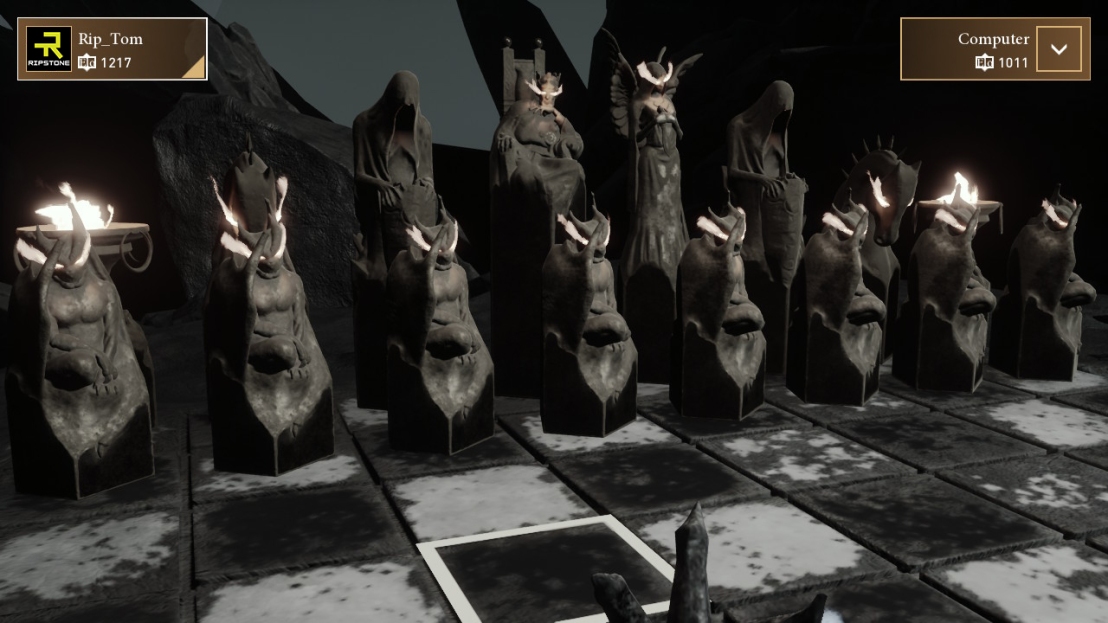 There are around 80 chess puzzles included, ranging from easy ‘Mate in 1’ puzzles where you have to find a checkmating move to much more difficult ‘Mate in 7’ puzzles. The best puzzle feature is the Historical challenges, where you take over and replay key parts of famous chess games from history. These are fairly difficult challenges where you have to win the game over the next several moves. I would’ve loved to have seen much more of these.

While the controls worked well enough in handheld and docked mode – touch screen being my preferred option for handheld – I feel that the user interface needs work. It’s by no means bad but it has a few rough edges that make things such as starting a new game more difficult than they really ought to be. The most annoying issue is the use of thin white borders on a brown background that make it hard to tell what you’ve highlighted when making selections from menus.

As for its chess playing ability, Chess Ultra features 10 preset levels of difficulty for those who want to face off against the AI. The lowest level plays like a drunken monkey, making random, nonsensical moves on a regular basis. I could probably beat the lowest level when drunk to be honest. At the other end of the scale, level 10, otherwise known as Grandmaster mode, the AI will mercilessly smack you down unless you happen to be a very strong player indeed.

There are a variety of different time controls available: games with no time limit, 5 minute games, 45 minute games, etc. These work for online and the local 2 players on 1 Switch mode as well.

There’s a problem here, though. You might be able to beat the first four AI levels without too much difficulty but will eventually come up against a wall and repeatedly bang your head against it once you’ve met your match. There’s no way to tweak the engine to make it play more aggressively or positionally, or to practice different openings etc. The AI also appears to employ a limited range of openings and moves depending on its playing level. You can take back moves, either singly or in blocks of ten. 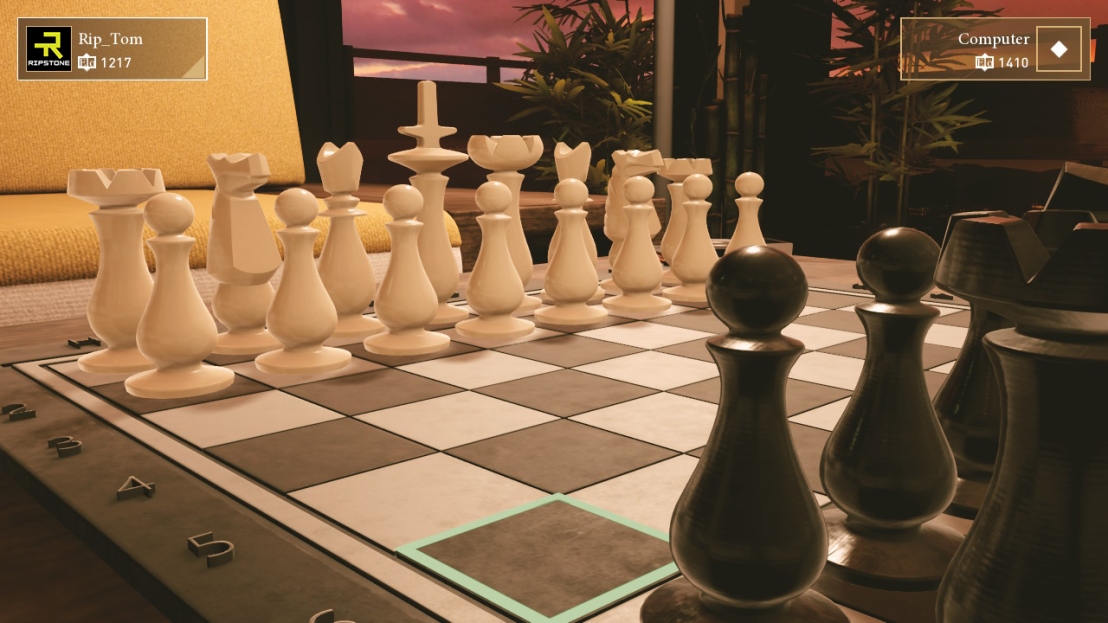 All in all I wasn’t particularly impressed with the single player feature set. It’s fine, it works, but it doesn’t do much more than play basic chess. I would’ve liked to see single player tournaments or more in the way of themed personalities to play against, as in the Chessmaster games of yesteryear.

As for the online feature set, you can play games against friends or random opponents. There’s also a tournament option where you can set up and participate in tournaments. The developer also creates larger tournaments from time to time. Try as I might I couldn’t actually get a live online game going, whether I choose a 5 minute blitz game or a 24 hours per move game and waited a good while for the game to search for opponents.

This perhaps indicates that the Chess Ultra community, while spread across multiple platforms, is fairly small. Of course, you might have a different online experience so I don’t feel it’s fair for me to write off online play entirely based on a few attempts. Playing a day per move chess with those on your friend list could be quite good fun, if you can get it work.

All in all, Chess Ultra is a bit of an odd beast. It feels like a case of style over substance, with the developer focusing more on graphics than deeper features such as in depth tutorials and challenges. Once you get over its neat visuals there isn’t a lot going on under the surface. Sure, it plays chess, and it can and will beat you, but that’s about all it does.

This isn’t a game for experienced chess enthusiasts. You’ll already be enjoying the vibrant community on websites such as chess.com or learning the intricacies of the Sicilian Najdorf against Fritz. Experienced players don’t need Chess Ultra in their collection.

And for everyone else, Chess Ultra is hard to recommend. It is by no means a terrible game but it doesn’t do enough or go far enough beyond the very basics of chess. You can get hold of far more useful chess functionality on the web or via free apps on Android and iOS. Unless you’re dead set on owning a good looking chess game on the Switch for very occasional, casual play against the AI or friends in online and local multiplayer mode, I’d give Chess Ultra a miss.

This review was written by a guest contributor who wished to remain anonymous. A review code was offered by the editor but the author had already purchased it.