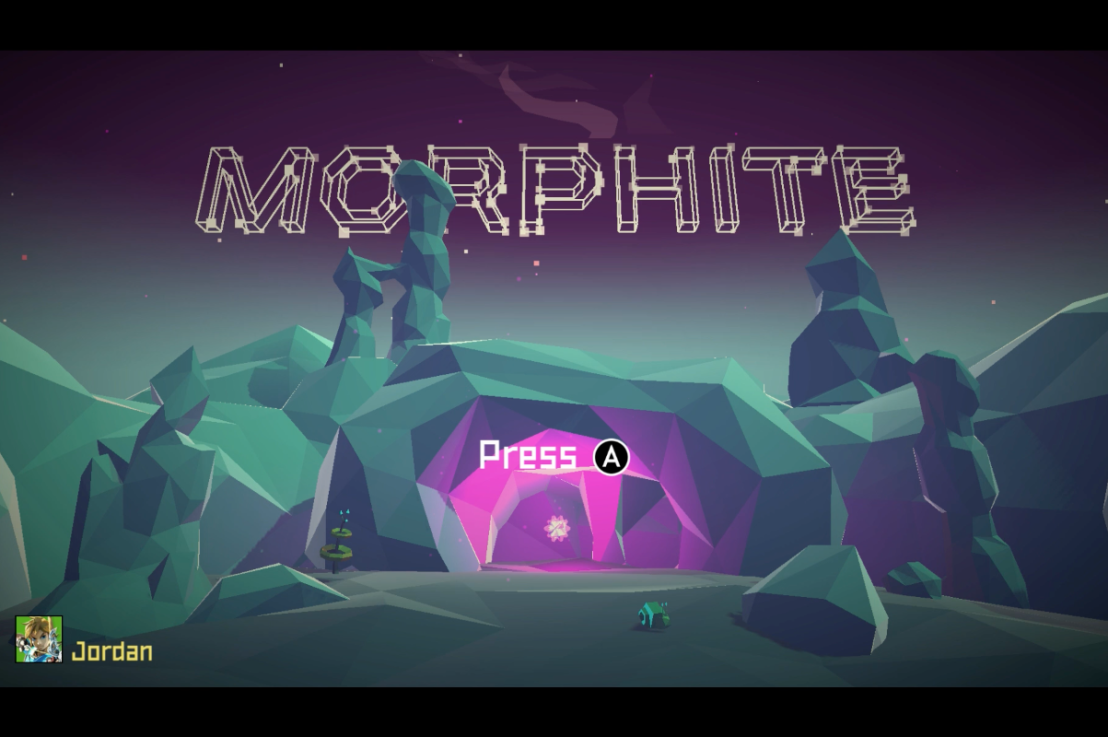 The first time I booted up Morphite I was immediately intrigued. A first person shooter is always tough task for an indie game. Most don’t turn out particularly well. But to me, this first person shooter instantly had a charm about it. I usually wait until the end of the review to talk about the visual style, but it’s honestly one of the things that drew me to the game at first. Everything has a very low polygonal count which makes me think of if No Man’s Sky used the art style of the original Star Fox. So there’s that nostalgia charm, but then there’s the oddly hypnotic tones of everything right from the beginning which just put me in a relaxed mood, instantly.

So yeah, feelings of No Man’s Sky. Now, I can already hear many of you sucking air through your teeth, but hear me out. Imagine if No Man’s Sky had no hype and kept its ambitions in check, and that’s what you’ve got here. I played No Man’s Sky and enjoyed it. Though I should state I didn’t follow the game up to release, nor was I hyped up in the lies. I enjoyed what was there. I also enjoyed Morphite even more.

Morphite is a nice mix of open world exploration as well as having a curious story to follow. You as the main character, the orphaned Myrah who sets out to help her foster guardian collect resources for his business. It’s not long before she lands on a planet and learns about the mysterious element morphite and goes on a journey to discover more about it, and also her past.

The story is well presented with some nice voice acting and it’s nice to have something to follow even if at points the game can be somewhat open to you doing whatever you want to do. The best character in the story, by far, is KitKat, a hovering robotic cat buddy with a voice that sounds like text to speech software. It reminds me so much of Tomodachi Life. The cats sarcastic lines and tones just make it a much better game.

Like No Man’s Sky, there’re different elements to the gameplay but for the most part you spend a lot of your time on planets, exploring the environments and cataloging the various lifeforms that inhabit them. This isn’t vital for the story, but you’ll want to do it as you can trade the data you’ve collected for cash which can be used to upgrade your equipment. You’ll also need to defend yourself against the occasional aggressive native species as well as other space-faring bandits who are also in pursuit of the afore-mentioned morphite.

You have a standard gun as well as finding upgrade pods which give you new abilities, very similar to how Metroid works in that regard. You’re barely into the game before you find your first one, some Ion Grenades which can blow up rocks. You even get a robotic pug dog that shoots lasers and helps you in battle for a short time. If that’s not worth the entry price alone, then nothing is.

Once I’d gained control of the main character, I started to get vibes of a cute Metroid Prime. Now, without wanting to get your hype levels out of control, no, it’s not as good as a Metroid Prime game. Though you can’t help seeing the inspiration from it. There’s a lot of exploring planets and solar systems, and you don’t really need to follow the story if you don’t want to. Personally I did enjoy following the story more than not since it did feel like I had a goal and I purpose to play. It’s not particularly complicated as you do some light combat, light platforming and light puzzle solving. Light is the word here, but it’s nice. Morphite actually tries to include a lot, although most of the more unexpected inclusions such as space combat, trading, exploring space stations and so on are quite on the simple side.

Sadly, in all its groundedness, Morphite still suffers from looking and feeling a little on the cheap side. The animation is what gives away its small independent production and as a result you do feel like you’re playing a cheap product at times which is a shame because Morphite does have a lot to offer. The boss battles and combat as a whole, while noble, does feel a little beyond what the game is capable of doing.

Overall, Morphite is a bold attempt from the developers. It’s both ambitious and grounded and it’s a jolly good time. I think the art style is nice and the overall presentation is good but the combat does make you feel like you’re playing a cheaper product at times which is a shame. If you can get your head around that then I do recommend Morphite to you guys. If you’re looking for a Metroid fix or want something similar to No Man’s Sky, then Morphite is the one for you.