Following on with a horror theme, straight from the disappointing Don’t Knock Twice, Merge Games have come in to publish The Count Lucanor, a retro styled 2D adventure game with an eerie vibe. It was released on PC last year, but has now found its way to the Nintendo Switch eShop.

Based on the 16th century book of just about the same name, I’m not entirely sure about how faithful it is, but this retro styled romp follows the story Hans, a young boy seeking adventure. On his tenth birthday he’s devastated to find out that he has no birthday presents from his poor mother as they both live a life of poverty since the father left to fight in a war. Now this is where right off the bat, I struggled to feel sympathy for the main character who throws a temper tantrum, says nasty things to his mother and runs away from home. Just because they are poor. He’s not adventuring to make his family life better, he just wants to make his own life better. 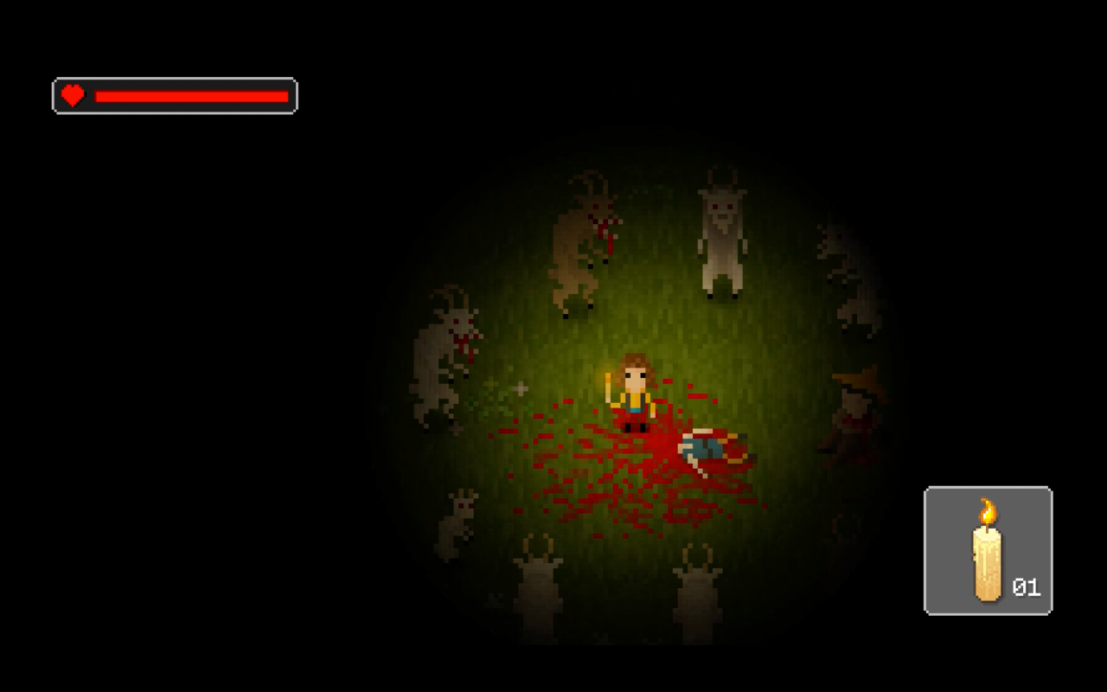 As soon as you have control of your character you can remedy some of his faults by helping people on your way for adventure. It’s not long before things start to get creepy though as Hans wakes up in a nightmare like world where things become genuinely creepy. After bypassing some

grotesque sights and dangers, you’ll soon be lead to a mysterious castle. As Hans enters the castle he is met by a blue kobold who wants to test the young boy as to whether he is worthy to inherit the titular Count’s treasure. To do so, he only needs to guess the kobold’s name. Sounds simple, right? Not quite.

To find the kobolds name you have to find letters hidden in the rooms of the castle, out of which involve solving some sort of puzzle. Considering this is the biggest aspect of the game, it’s a shame to see them all being really quite simple. Whether pushing around boxes or finding items to use, they’re not going to challenge you, at least not until right up to the very end when you finally put the kobold’s name together.

The gameplay has been commented on by the press as being a Legend of Zelda type game, but to be honest I’m not seeing that. To me, The Count Lucanor is more of a retro 2D Resident Evil with a more adventure focus. Trapped in a castle with few but deadly enemies and solving puzzles. Unlike Link with his sword and myriad of weapons in his arsenal, Hans is pretty much helpless and can only hide from the enemies that lurk around the castle.

One core mechanic of the game is the fact that most of the corridors and rooms of the castle are pitch blank. You collect candles which you use to help find your way around. The light doesn’t stretch far, but you do have the ability to place candles on the floor to stay there forever. Not only does this let you see bad guys in advance but can be used as a sort of breadcrumb trail to see where you’ve been in this sometimes maze-like castle.

As you start to pick up letters, you’ll notice things around the castle starting to change or develop. You’ll meet people in the hub area and in the corridors who do different things at different times, give you things or sell stuff or give you a task. It makes the game feel quite more intricate than you would otherwise think based on appearance.

Sadly The Count Lucanor isn’t a particularly long game and will only last you a few hours which is a shame as an expanded version would have been lovely. What does extend the length though is just how punishing it can be. The Count Lucanor is old school, baby. Auto-saves? What’s that? Just as I pointed out, it gives me vibes of a 2D whacky Resident Evil and the saving mechanic is very reminiscent. If you die, you go back to your last save. “So save often!” I hear you say. Well, remember the scarce ink ribbons in Resident Evil? Well, in The Count Lucanor, they’ve been replaced with gold coins that you use to bribe a crow to save your game. While you can find coins here and there, you need to use them for other things too, not only saving your game. At first I was distraught about time wasting dying and so on, but it adds so much tension to the game I actually grew to love it.

Surprisingly, I think there is room for replayability in Lucanor as, even though I can’t confirm, there are different ways to go about it, secrets to find and so on. How many replays, well I’m not sure but if I had the time I would certainly give it at least one more play.

Some problems I have are with the presentation, while there are lots of creepy, weird imagery in The Count Lucanor I really quite disliked the character design, especially the main character’s, Hans. There’s just something about his design that is quite off-putting, something in his face and spindly arms. The environments are pretty fine though, but it’s not the best looking retro-styled game I’ve seen. Sound design is also pretty middle of the road, with little music and some okay-ish sound effects that try to enhance the creepy factor.

Overall, The Count Lucanor is an interesting game to say the least. It didn’t leave a good initial impression but once I’d rocked up to the castle it began to gel with me. I enjoyed sneaking around the dark castle, seeing it develop over time. If it was a bit longer I probably would have come out loving this game but its short length makes it seem like wasted potential. It left me wanting much more. It’s an intriguing game and really quite unique even if it can be quite simple at times. I personally think it’s worth a play through or two but the price is maybe a little high for the couple of hours you’re going to get with it.