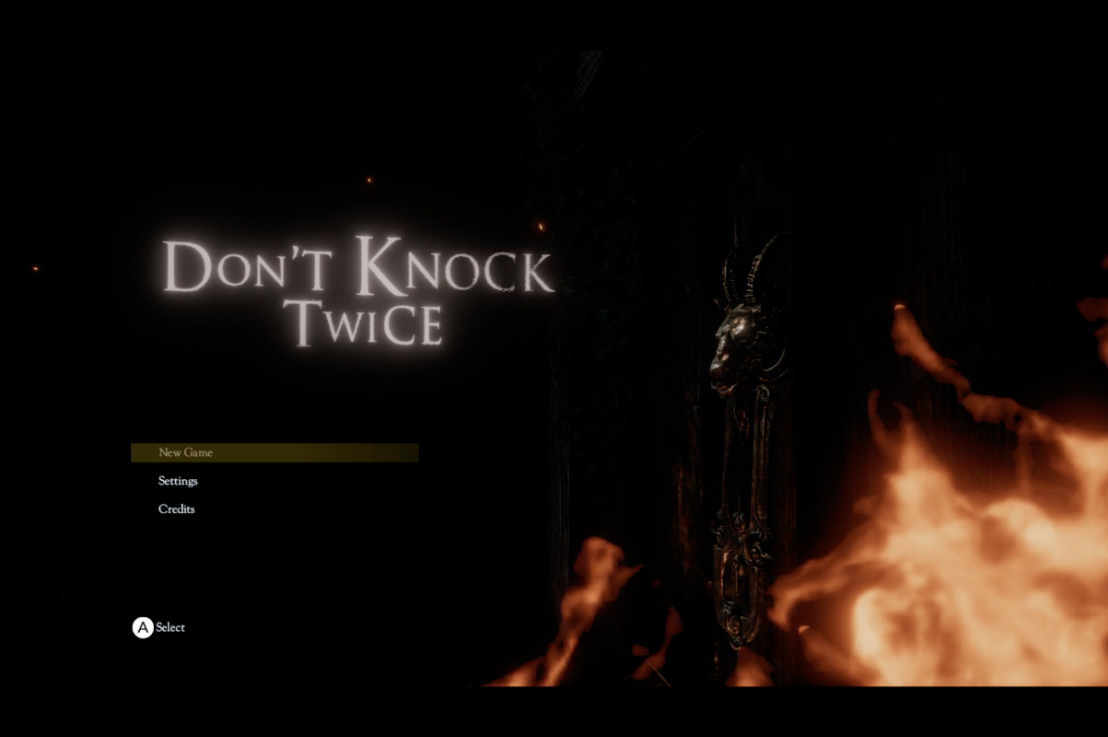 The season of Halloween is just about upon us which, as sure as the sun rises, means a slew of horror games will be heading our way. The first for me is Don’t Knock Twice, a psychological first person horror game from Wales Interactive. It was originally released on PC with a special inclusion of VR support. As this is the Switch version, obviously that feature has been taken out but then main game is still intact.

You, as the protagonist, are placed inside a spooky old mansion, as per the genre standard. The story is told through messages laying around the house as well as via text messages from a person called Chloe. It’s not long until the pieces of the puzzle are are put together. I actually really loved the idea of the story revolving around Chloe and her estranged mother, as well as some missing local children and an old folklore tale. It’s really quite good to be honest and is for me, the best part of the game. Now, as a bonafide wuss when it comes to horror games, I always go in with a bit of dread. And the main question that comes up about horror games is, is it scary? Well maybe I’m not the best person to judge since even the original Resident Evil shits me up to this day. I think it’s more the tension and your characters vulnerability than the actual horror on show that gets to me. And in that regard, I didn’t find Don’t Knock Twice all that scary. Mainly for the fact there is little in the way of threat for the most part. A lot of the game is highly psychologically based with banging noises, atmosphere and the occasional jump scare, rather than being in actual danger.

I think Don’t Knock Twice is stronger in its narrative rather than its scares. The pacing and intrigue of the story are often more powerful and it’ll certainly stay with me longer, as I look back on the game a year from now, that’s what I’ll remember more. Yes there are some creepy visuals and jump scares, but no true horror. Saying that, as one of the very few horror games on the system, with only competition from games such as Vaccine, it’s definitely the scariest one on the system so far.

Sadly there’s very little on offer for replayability, with its linearity you’ve seen more or less everything the game has to offer. There’re few worthwhile secrets or collectibles or new game plus to speak of. It’s not particularly a negative as I know, from my own personal experience, not everybody wants or has the time to replay games. You just need to keep it in mind for what you require as a gamer. It’s a one time play through only, especially as the shocks and the story, the game’s main pull, will have all been seen and don’t need to be seen again. Another sad part is the length which will probably stretch to about 2 hours or less, depending on how stuck you get. That could be the killer blow for people.

I’m not usually one to complain about small bugs or glitches, but I really fell foul of some glitches in Don’t Knock Twice. In one section of the kitchen, you can pick up two axes that are essential to making it through to the next part. Unfortunately, both axes glitched through floors and cupboards when placed down, making it impossible to pick them up again. At first I just thought I was stuck on a puzzle, trying to find an exit, little did I know an axe was needed. I spent a good 20 minutes walking around the same small room looking for any clue until I gave up and looked online to find the game screwed me over. Graphically, it’s alright for an indie game on the Switch. The atmosphere and mood are nice and set the tone for a horror game well. It makes a welcome change from the retro sprites and simple 3D models that we’re used to on the system so far. Unfortunately the performance isn’t the best as I noticed the frame rate was a little lacking. The sound design is pretty decent. With knocks and atmospheric noise being essential to the experience.

Overall, Don’t Knock Twice is an okay-ish horror game for the Switch. It’s missing it’s VR features, which was honestly one of its main selling points, but it sort of fills a gap that hasn’t been filled so far, but it certainly has the potential to be eclipsed in the near future. It’s a little light on scares and frights, mainly due to its very short length and so it’s not a recommendation from me. Horror fans may want to give it a try though if it’s on sale.