For the second time in just a few days, we’re looking at another beat ‘em up, following on from our Wulverblade review. This time Squareboy vs Bullies: Arena Edition is from prolific eShop publisher Ratalaika who, so far, have had a mixed bag of games on offer. How does this stack up compared to their good releases such as Vaccine and League of Evil, or is it closer to 36 Fragments of Midnight? Well let’s find out.

As stated, it’s a beat ‘em up with a heavy retro inspiration going on as you can tell from the graphical style. It was originally a mobile title, which it should be noted as being free to download. Here it’s been reworked for the Switch, and is all the better for it with actual physical controls and a larger play screen. But is it worth paying money for?

The title really gives away the story of the game so I guess I don’t need to elaborate much there. Squareboy is facing off against the bullies across 12 stages, trying to teach them to be nice and end their bullying way. 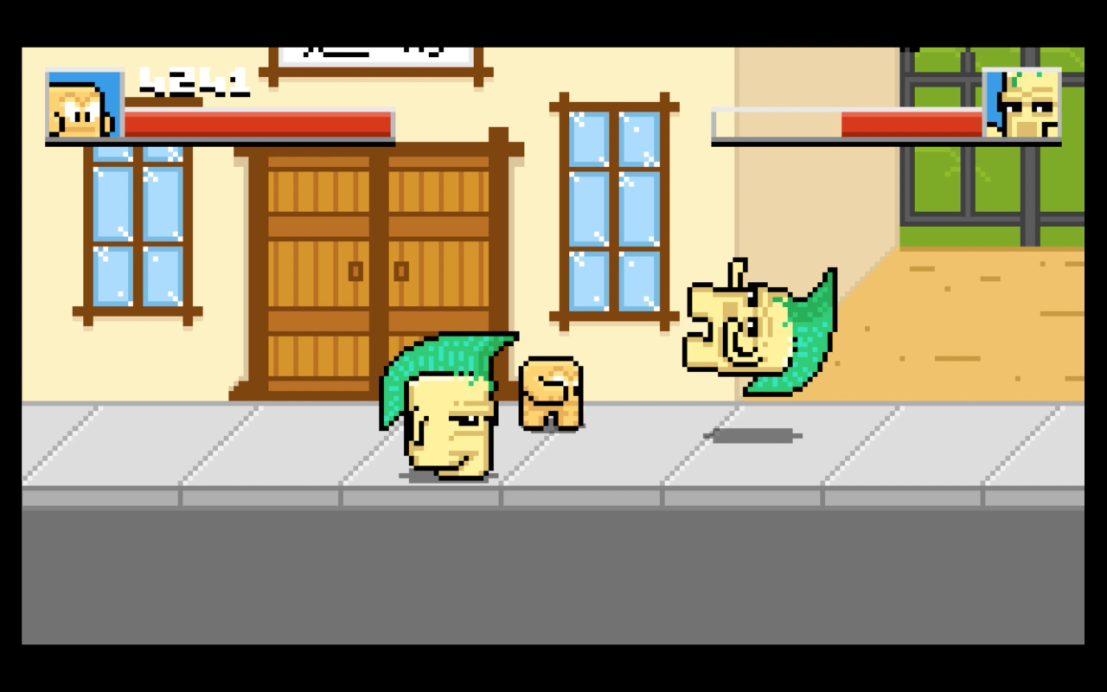 Controls couldn’t be simpler and pretty much follow every retro beat ‘em up, especially games like Double Dragon and River City Ransom. You have one main attack which can be spammed,

but have more advanced moves such as dashes which are a little more dodgy. I’ve never been a massive fan of the double direction input as it’s just so inaccurate and unreliable. This is the case in Squareboy as well as well as just about every beat ‘em that uses this mechanic. Double tapping direction buttons before the normal attack can help perform uppercuts or leg sweeps and such, but these really aren’t need on the whole. In fact, I only began using the dash in the last few stages.

You have a jump button which, when combined with attack, can perform a far too useful drop kick allowing you to keep groups of enemies at a distance. Finally you have a button for picking up environmental items such as boxes and bins that can be lobbed at enemies. You can even pick up health packs and occasionally baseball bats and nunchucks that enemies will drop.

It’s all pretty solid and standard. Squareboy vs Bullies has just one major problem, though. It’s a bit boring. It’s not bad mechanically and doesn’t do anything majorly wrong, it’s just not fun to play. It’s repetitive and same-y throughout the hour and a half campaign. Once in a blue moon a new enemy arrives to liven things up, but even then “livening up” is far too strong of a phrase for this game. It’s sadly dull and mindless. What happens in your first battle, is exactly the same as what will happen on the last battle before the end boss, of which is really the only shake up of gameplay.

I’ve been a victim of playing stupidly difficult games recently, but Squareboy is the one to buck that trend as it’s effortlessly easy. I only died once and that was to the final boss which kind of took me by surprise as, since by that point, I’d not been in any danger at all. I think this is because the transition between mobile and Switch has naturally made it easier thanks to physical, accurate controls.

This Arena Edition includes an extra mode, which you won’t be surprised to hear is an Arena Mode which lets you battle wave after wave of enemies until you fall in battle. It offers a handful of different location that can be unlocked in sequence by achieving certain goals in the previous stage. To be honest, it’s nice they added something to the game for the Switch port, but honestly it’s not particularly substantial and I didn’t find it held my interest very much. Saying that, these modes just really aren’t for me.

There’s also the addition of 2-player co-op in this Switch version. You can each play with a single Joy-Con which is nice for portable tabletop situations should the need arise. With the game already being pretty easy, it naturally becomes an absolute cake walk with two people playing.

Squareboy vs Bullies isn’t a looker that’s for sure. Overall, with just being entirely made by one person, the production value is really quite low. To be fair, I like the character sprites somewhat, they’re chunky and really do remind me of old NES beat ‘em ups, but the background are honestly atrocious. Almost Microsoft Paint bad. The music, also made by the same person, is quite mediocre too. The attempt at chip tunes are nice, but they’re badly mixed and are really quite forgettable. It’s commendable to do everything yourself, but really, sometimes it’s better to look for help.

Overall, you can’t expect too much from a game with such a low price point made by one person but, even worse than being bad, Squareboy vs Bullies manages to be boring. It’s probably the cheapest beat ‘em up on the system, but it’s still not worth it even for those who are fans of the genre. It doesn’t do anything massively wrong it’s just so unambitious and uninspired. Personally I would not say it’s worth your time or money.