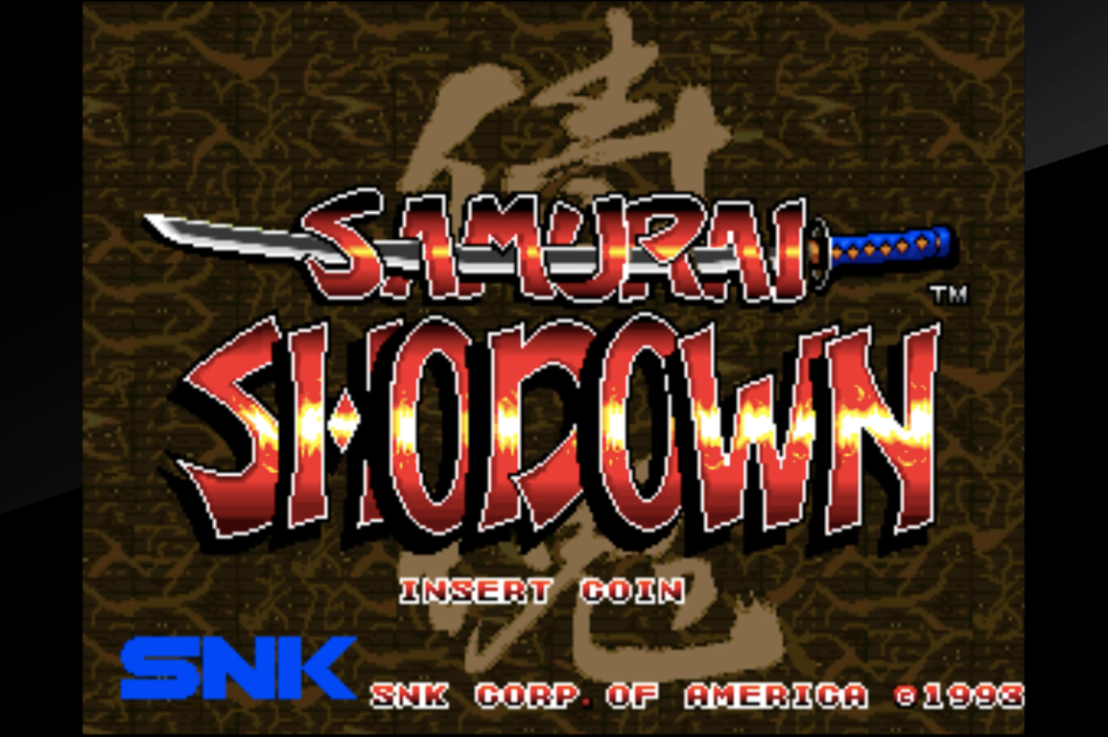 While there are probably dozens of SNK fighter games, there are really only a few that actually strike a chords with the masses. King of Fighters is up there along with what we have here, Samurai Shodown. Disclaimer: The is the first Samurai Shodown game that I’ve put any decent time into. I’ve played a round or two of the sequels, sure, but not enough to make a judgement. Therefore, no matter how improved they may be, I can’t hold it against the original. This is my unclouded opinion of Samurai Shodown.

Set in late 18th century Japan, Samurai Shodown was quite unusual for the time as most fighters tended to stay in modern times and beat each other up with fists and special moves. While you do kick and punch in Samurai Shodown, it’s highly leaning towards weapon play. The 12 playable characters each have their own unique weapon which are quite powerful. Six buttons are used; three weapon attacks, from heavy to light, as well as three for kicking. A fun part of the game is that you can lose your weapons sometimes, at which point the weapon attacks become punches.

There are special attacks too, some of which are easy to pull off, using the typical quarter rotation + button input and just playing one round will allow you to pick up one or two that you’ll use to your advantage. There are some more trickier moves to pull off but I generally stayed with what I knew and was simple enough. In this port, HAMSTER have been nice enough to include some special move lists hidden inside the manual which can be found in the pause menu. I definitely advise giving that a quick read when choosing a new character to play as.

Speaking of characters, they are awesome. They all have a distinct personality and gimmick that sets them apart from each other. As always, some have a slightly bigger draw and are more memorable, but I’m happy enough giving them all a try once in a while. I did find my favourite rather quickly though. Even though it’s primarily a Japanese based game, there are a few select foreigners either from around the world which adds to the variety, and those tend to be the more unique play styles available.

Personally I think Samurai Shodown is played at a slightly more considerate pace. As you know, I’m not an expert on fighting games by any stretch off the imagination, but I think in Samurai Shodown you can’t just rush in. Damage seems quite dynamic and just one perfect blade slash can be devastating. You can turn the tides of battle with just one hit. My biggest noob tactic in fighting games is jumping constantly (yes, I’m aware it’s not a very good tactic but it makes me feel good as well as annoying) but Samurai Shodown really took that away from me since if you’re hit in the air, you take a lot damage.

Something to take in account is the Rage Gauge which is a meter on the bottom of the screen. As you fill it up your character becomes redder and redder. When it reaches the top, your attacks become much stronger for a short time so it’s best to play defensively once your enemy reaches this state. Personally I don’t care much for these power gauges in fighting games but I guess it does add a bit of the unknown into the arena.

As with almost any arcade fighting games, it’s difficult. Even on the lowest difficulty setting I struggled to get through it. But get through it I did, through a lot of persistence and, shall we say, cheap tactics. It’s a shame it’s not a tad more accessible, but that’s just how it is with older arcade games. Saying that, having played it for a few hours for this review, that’s really not enough time to learn and master it. Something I heard once was that you need to spend 100 hours with an SNK fighting game to truly understand it. As much as I would love that time, it’s just not gonna happen.

It’s gorgeous, absolutely gorgeous. For the time, the presentation and production value must have been off the scale. Right from the glorious intro sequence, you know you’re in for a visual and audio treat. Animations may not be as full as later Neo Geo games like Mark of the Wolves, but the colour palette really make it seem like a game out of time. It wears its 1993 birth very well. Everything just pops off the screen, especially in the Switch’s handheld mode. The environments set a very beautiful scene of Japan at the time. Sadly, since there are also non-Japanese characters, this also means non-Japanese stages. These are okay, sure, but don’t carry the majesty of the Land of the Rising Sun.

There is a surprising amount of violence in Samurai Shodown, with bloody spurts and everything. Apparently there’re also decapitations and the like but I’ve never actually seen it and appears to be a rare occurrence, similar to Mortal Kombat’s fatalities.

Just a heads up, I usually get asked if these Neo Geo games have online play on the Switch. No they don’t. Only online leaderboards for the Hi Score and Caravan modes. The only form of competitive multiplayer is local, which is always a good time and is especially tense with Samurai Shodown’s gameplay. Also, as with any HAMSTER Arcade Archives series, you can change a lot of the settings, even choosing between the Japanese and International versions. I only stuck with the International version so I’m unsure if there are any differences in that regard.

Overall, Samurai Shodown isn’t quite as accessible as say, Garou, and I don’t know how it stacks up against its sequels. What I do know however, is that the first game is a great foundation for a series to be based on. I enjoyed playing through Samurai Shodown, the 12 long battles to the enjoy was definitely an experience. It’s just as difficult as other early SNK fighters, but it still feels great to play even if you get your arse kicked time after time. The fact this has made me want to check out the later games just tells you how I feel. In the comments below be sure to let me know which one I should have a look at. The main draw aside from the gameplay is just how stunning it looks and sounds and I think it’s worth a download, especially if you’re going to be playing against a friend.