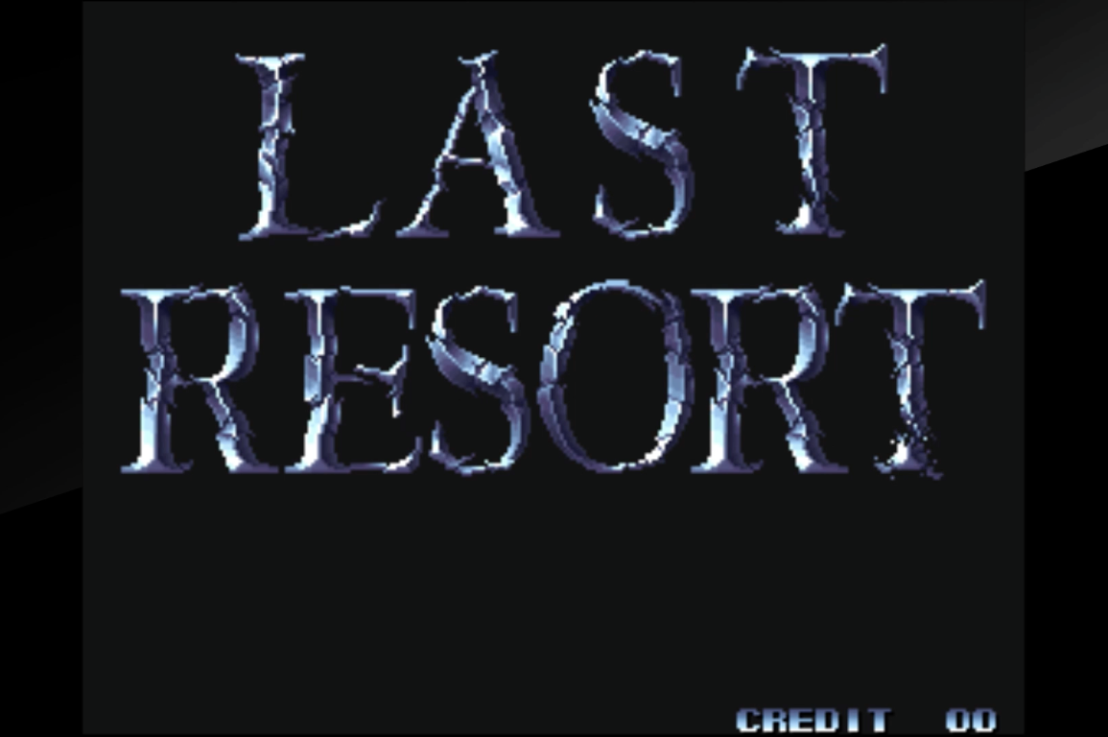 When it comes to side scrolling shoot em ups, Last Resort probably isn’t going to be the first game you think of. Most people would go for Pulstar or, my new personal favourite Neo Geo game, Blazing Star. Last Resort was an early attempt to diversify the library of the fighter heavy Neo Geo system and its early release kind of shows in the same sort of way Alpha Mission 2 does. But does that make it a game to dismiss? Let’s find out.

Last Resort is a horizontally scrolling shoot ‘em up that originally arrived in arcades in 1992. Set in a futuristic world, you pilot your ship to destroy waves up waves of enemy ships. It’s not a bullet hell shooter exactly, although it does have its moments.

So what’s the gimmick for this one? Well, similar to games like R-Type, the first power up you acquire in this game is a drone that circles around you. It shoots in tandem and in the opposite way from which you are flying, so there is a bit of control there. The B button locks it and unlocks it from position which can be quite useful in some areas as it offers protection from fire.

While you have a standard shot you can also pick up extra fire power; either grenades, missiles or lasers and these can be powered up up to three times, which considering my next point, isn’t the easiest thing to do. In fact I very rarely managed it.

Man this game is difficult. It really doesn’t hold back, throwing everything it has got at the player. I’m ashamed to admit that I really struggled getting through this game and I may have thrown a hissy fit or two during certain parts. Even though you can turn the difficulty down, I couldn’t tell any difference between the default setting of four, and the lowest one of one. They were as brutal as each other. There’re a couple of things that make it so difficult. Firstly one hit deaths; fine for the genre and not something I mind as a design decision but mixed with the next two points it can be a little frustrating. Next is the fact that wherever you think is a safe place to hang out, you’re wrong. There’s always something popping out of nowhere to instantly catch you off guard and take you out. Finally, the checkpoint system means that death sets you back, sometimes quite a way thanks to their inconsistent intervals. Even if you make it past a particularly tricky part you’re not guaranteed to be completely past it. Last Resort is not a game you can just sit back and relax to like my favourite shooter, Blazing Star. It’s intense and a learning experience.

All of this sounds like I’m complaining, but I’m not. Last Resort is a game for shoot ‘em up fans who thrive on learning the game by heart. There’s a time and a place for games like this for some of us. I wouldn’t say Last Resort is about going for the high score like some other shooters, but managing to get through unscathed is the real achievement.

It’s a very short game with only five stages, but considering the immense difficulty, a game that should last about half an hour turns into hours as you keep retrying the same parts over and over again.

Something I will complain about is the horrific amounts of slow down. Normally I don’t mind it once in a while when things get hectic or explode-y as it’s to be expected on such limited hardware. But Last Resort is once of the worst offenders in my opinion. The inconsistency in frame rate can hamper the experience somewhat as changing speeds all the time; fast, slow, fast, honestly adds to the difficulty in an already difficult game.

As with all HAMSTER games they’ve included the Caravan mode and Hi Score mode, which offer some modest addition to Last Resort. Then there’s the settings which you can just about change to your will. You can change how many lives you begin with, difficulty, how many points until a bonus life as well as button mapping. You can also add rapid fire in the settings, but sadly this negates the ability to use the charge shot. Personally, while I feel I maybe missing a trick with the charge shot, ultimately I value my fingers first and foremost. Last Resort is a great looking game, yeah the colour scheme may be a little dark and drab, but it’s got style. The designs of the environments and enemy craft are well thought out, with a mechanical insectoid appearance. The look of everything fits so well together. The moody dystopian setting, especially of the first few stages really makes me think of 80’s sci-fi action movies and that can only be glorious. The sound design fits it well too with very tense electronic beats that remind me of the terminator theme for some reason. Very good all around.

Overall, Last Resort is a great, but very cheap shooter. It’s painfully difficult at times and needs intense skill, memorisation and as much persistence as you can muster. As always, HAMSTER have done a great job with the port, although I wish they could have eliminated to slow down just a little. Of the three Neo Geo shooter games that I’ve reviewed, this one stands in the middle just about, wedged between the greatness of Blazing Star and the decent Alpha Mission 2.