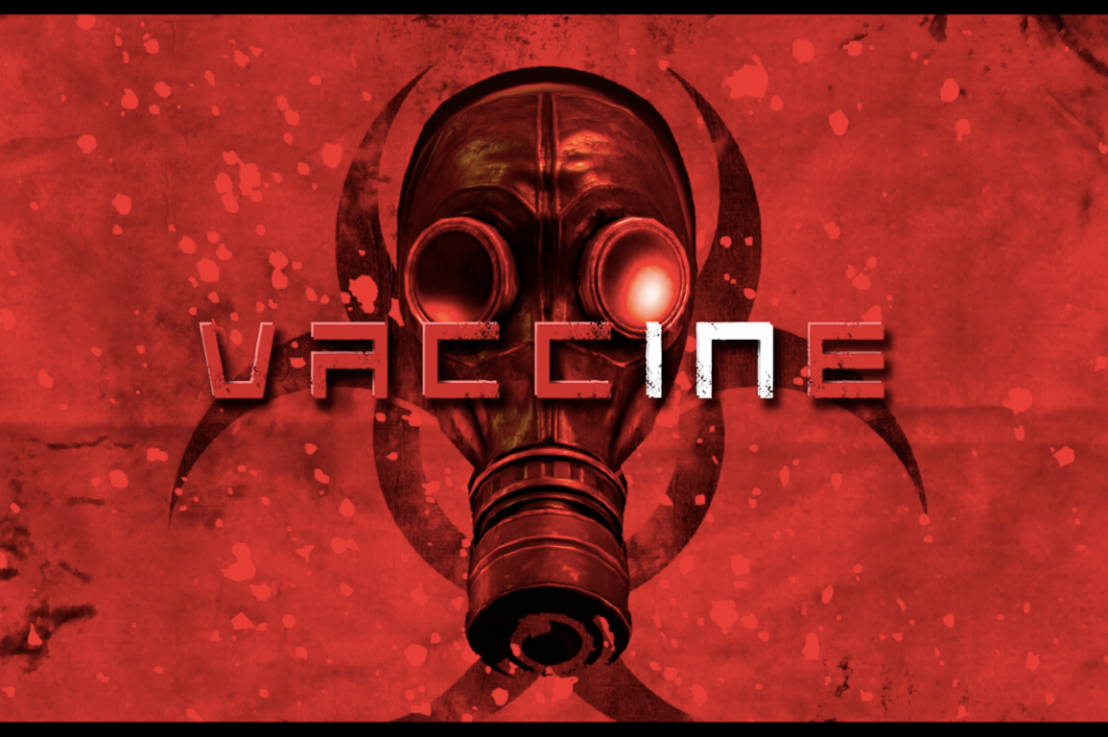 Resident Evil. A staple of the 90’s PlayStation gamer. It was a great time to be a survival horror fan, a genre that rose, peaked and diminished within just half a decade. But it made its mark on the gaming landscape forever. There’s certainly a lot of nostalgia surrounding it, so much so that people often crave for the glory days once again. To capitalise on that desire is Rainy Night Creations with Vaccine, a game that couldn’t be more tonally different from their last release, the bright colourful cartoon-like FreezeMe.

Vaccine wears its heart on its sleeve. There’s no doubt as to which series inspired it. Some may point towards Alone in the Dark but at its core it’s the original mansion investigating Resident Evil that it aspires to imitate. Compared to the games it’s paying homage to the actual gameplay type is a very different beast, however. It actually has more of an arcade-y experience to it. You choose between one of two characters at the start, a man or a woman. While they have names, different stats and a short bio, they are actually rather characterless sadly. Depending on which one you choose, the other becomes the one you need to save.

After choosing a character the game loads up to you in a room with your partner convulsing on a nearby bed. Without much time to think about what you should do, a rather panicking countdown begins. With a knife on the floor and a brief note on the bed you set out to find a cure. What sets Vaccine apart is that the environments are randomly generated. It’s a game designed to be played over and over again. Every time you venture out; rooms, corridors, item placements and even end goals are in different places. An intriguing concept.

The randomly generated environments are intermittently filled with your standard horror enemies, the majority of which are shambling zombies. There are also bats and sneaky rats who hide under furniture. While, these can be fairly easy to deal with there’s one enemy that is a complete run destroyer. I decided to name them “Crawlers” for obvious reasons. They are incredibly strong and resistive to your offences. The first time you happen upon one of them, you will die. They are an incredible difficulty spike in an already fairly difficult game.

Part of the difficulty comes with luck. If you’re lucky, you’ll be fine at least until you come across Crawlers. The randomly generated items placements play a big part in your chances of survival. Sometimes you’ll pick up a handgun within a few rooms, sometimes you won’t find one at all since enemies will gradually wear you down if just using the knife. Luck based play through probably won’t rub well with many people but I personally feel it really does make each time playing different.

You will get frustrated though. I died time and time again. The Crawlers got me every time without fail even when I was lucky enough to find a handgun or shotgun. I couldn’t find the cure. Vaccine forces you to be more tactical with your items and the way you upgrade your character. Yes, Vaccine has a levelling up system, something not usually found in the genre. You gain experience points by attacking and defeating enemies, even opening doors grants you a little. With it you can upgrade a few different stats such as resistance, aiming, luck and so on. I will say it’s implementation is a little on the clumsy side. There’s little indication of when to level up and the crudely designed menus don’t help either. Even finding the cursor location is a task in itself.

If you use your items wisely and tactically upgrade your character, then you can actually manage to get through the game. Despite looking like a mindless survival horror game, you really do need to be clever about surviving. The seemingly impossible becomes possible. Finding the vaccine and returning to your comrade does not mean the game is over, however. Instead you get the same message as when you began, despite your best efforts, your friend has been infected again. Time to find another vaccine, although now with less time!

Scattered around the corridors and dimly lit rooms are plenty of notes left behind for you to read. It’s advised to actually read them as they leave clues as to the real mystery behind Vaccine, because there is more to it than meets the eye. There’s a secret that needs to be investigated. If you only keep finding the vaccine then it will keep repeating over and over, you won’t get the true ending. I won’t say how to complete the game as it’s rewarding to find out yourself.

Along with the menu system, the game does have its own set of flaws that can’t be pinned on the genre. Picking up items is way too finicky, you need to be at the precise point in order for the game to register you’re picking something up. Not something that should go hand in hand with a game with tank controls. Also, with the environments being randomly generated each time, you will often see the same rooms over and over again. There is plenty of variety but it’s still not enough to stop the same ones cropping up time after time. There are even hilarious moments where you exit one room and enter another room which is exactly the same as the previous one, the game acknowledges this by giving your character a confused status. A nice touch.

It completely nails the feeling of 90’s horror games, through it’s purposely blocky, grainy textured character models, the pre-rendered environments, music and even the sound effects. Who’d have thought overly exaggerated footstep sounds could take me back to my youth? Well, Vaccine did. Likewise, the often opinion dividing tank controls and fixed camera angles are here in full force. Are they bad? Undeniably, yes. But that’s what Vaccine is trying to do. Some people get along with them, while modern gamers will probably want to vomit at the thought of awkwardly turning and moving your characters while getting disorientated by odd camera angle switches. It’s a method from a different era but it’s difficult to mark it down as a negative even though some will undoubtably hate it.

Vaccine is a commendable homage to survival horror of the 90’s. As a cheap Wii U eShop download, it obviously doesn’t come close to matching the glory days of the original Resident Evil trilogy, nor does it need to. It will probably satisfy those nostalgia seekers but will put off casual gamers, not only due to the “classic” play style, but also as a result of new flaws it brings to the table. I did enjoy playing Vaccine, and it’s unique take on the end goal. My first few tries playing it gave me a bit of head scratching and a touch of frustration, but once you tactically build up your character and learn the tricks you can give your self a good chance even if luck is still heavily involved. The more I played it and learned it, the more I need to recommend it to you. Just give yourself a bit of time to play it smartly.

One thought on “Vaccine – Wii U Review”